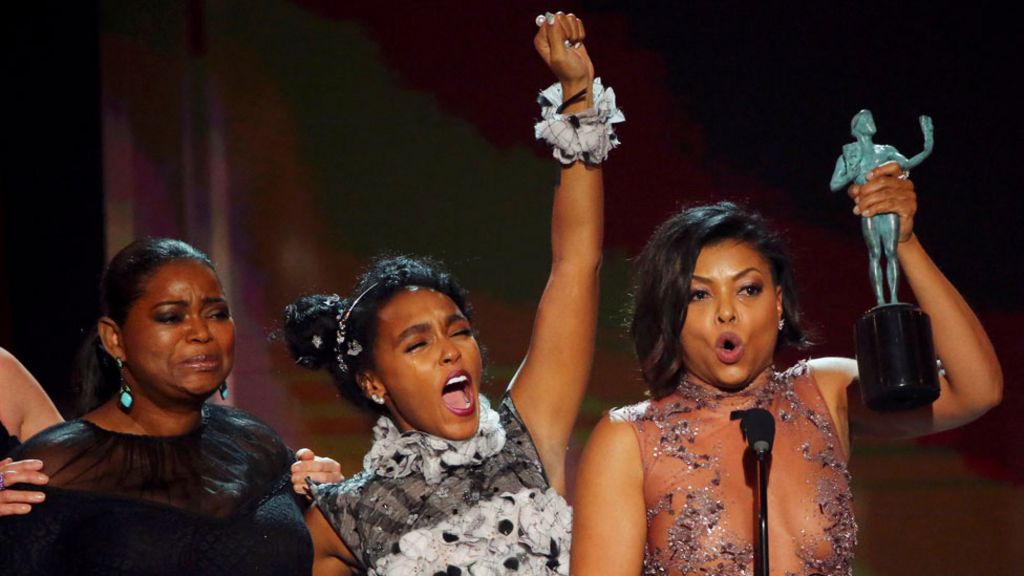 Hidden Figures was the surprise winner of the top prize at this year’s Screen Actors Guild (SAG) Awards, which was dominated by anger over Donald Trump’s policies on immigration.

The film, which tells the true story of black female mathematicians during the 1960s space race, won the best ensemble prize at the Los Angeles ceremony.

The tone was set by host Ashton Kutcher, who began the evening by greeting “everyone at home and everyone in airports that belong in my America”.

“We’re in a really tricky time in our country and things are very inexcusable and scary,” said Emma Stone as she won the best actress prize for La La Land.

Mahershala Ali, meanwhile, spoke about his Muslim faith as he accepted the best supporting actor prize for Moonlight.

Julia Louis-Dreyfus called the immigration ban “a blemish” and “un-American” as she won best comedy TV actress for Veep.

And there were cheers for actress Taylor Schilling when she described the award-winning cast of Orange is the New Black as “a diverse group of people, representing generations of families who have sought a better life here”.

Yet the actress told reporters that every black nominee had been shortlisted “because they deserve to be” and “not… because of the colour of their skin.”

Meanwhile, Lily Tomlin was presented with a lifetime achievement award by her 9 to 5 co-star Dolly Parton at Sunday’s ceremony.

There were also awards for John Lithgow and Britain’s Claire Foy for their work in The Crown, Netflix’s drama about the British royal family.

Hidden Figures’ success came at the expense of such Oscar-tipped titles as Moonlight and Manchester by the Sea.

Oscar favourite La La Land was not up for the outstanding performance by a cast in a motion picture award – the SAG equivalent of the best picture prize.